Sign up Contact Support
Shared with the permission of blog author and Adeline Yoga Community member Marc Rumminger of http://www.marcsala.blogspot.com/ 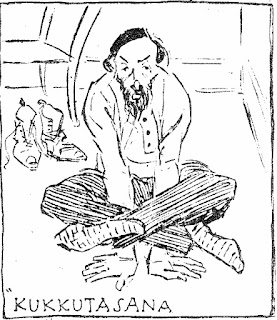 In his legendary “The Physiology of Taste“, Jean Anthelme Brillat-Savarin writes “Tell me what you eat, and I will tell you what you are.”  A recent survey of Iyengar yoga students* has a similar idea:  Tell me about your home practice, and I will tell you about your general health, mindfulness, and more.  A clever comparison, to be sure, but probably an overstatement, as I’ll explain below.

Researchers from the University of Maryland School of Nursing and the National Institutes of Health Clinical Center contacted 15 Iyengar yoga studios to obtain email addresses of 4,307 subjects, who were invited to take an on-line survey.  Only 1,045 of the invitees completed the 65-item survey, which asked about items that included basic personal information (age, gender, etc.), yoga practice (frequency; what components make up their practice, e.g., poses, breath work, meditation, and study of yogic philosophy), sleep disturbance, subjective well-being (happiness), fruit and vegetable consumption, and more.  The authors specifically chose to work with Iyengar studios because of the size of the network (900 teachers, 100+ studios) and because of the “strict standardization of teaching that would likely contribute to consistent instruction.”

Survey Says…
If we assume that the respondents are a representative sample of Iyengar yoga practitioners (a big, and probably unwarranted assumption), the results offer a snapshot of the Iyengar yoga family. The respondents were 84.2% female with a mean age of 51.7 (the standard deviation, abbreviated as SD below, was 11.7, meaning that 68.2% of the population was within 40 and 63.4, assuming a normal distribution).  On average, the respondents had practiced for 11.4 years (SD 7.5), attended 6.1 classes per month (SD 5.1), and practice outside of class 12.2 days per month (SD 9.7). This last variable — practice outside of class — stood out to the researchers, and they noted that “frequency of home practice was the practice variable that most often predicted aspects of health.” (It’s important to note here that the word “predicted” refers to the predictions of their mathematical models, not causality.)  In other words, if you tell me how often you practice at home, I can roughly estimate your level of mindfulness, subjective well-being, how many fruit and vegetable servings you eat each day, and whether you are a vegetarianrelative to someone with a different practice.  People with a more frequent home practice were found to have greater mindfulness, better subjective well-being (happiness), and a lower body-mass index (BMI).  Each day of practice per month, the statistics showed, led to a decline of 0.17 in BMI.

Overall, the results show that when it comes to yoga practice and its association to good physical and mental health, what matters is not how many years you have practicing, but how often you practice.**  Each category of physical poses (standing, vigorous, inversions, gentle) relates to one or more aspects of health, mostly physical. Breathing and meditation work, in contrast, are related to mindfulness and subjective well-being. Practice of gentle poses at home was associated with 3 aspects of eating behavior and food cravings: with practitioners of gentle poses eating more fruits and vegetables, being more likely to be vegetarians, and consuming less alcohol. This result suggests to the authors that a potential yoga-based weight loss regimen should combine physically demanding poses for strength and calorie burning with gentle poses for craving reduction.

Some Giant Caveats
Before jumping to any conclusions about home practice or philosophy study and health, at least two big questions need to be addressed.  First, did the survey have any selection bias?  That is, were those who are healthiest, happiest and most enthusiastic about yoga the most likely to respond?  And second, was the better health and happiness caused by the home practice, or are healthier and happier people more likely to have a vigorous home practice (“causality”)? Poor health, depression, and exhaustion can be intense enemies when it comes time to roll out the mat and get out the blocks before work or after work (and even on the weekend).

Notes
* Ross, Alyson, Friedmann, Erika, Bevans, Margaret, and Thomas, Sue, “Frequency of Yoga Practice Predicts Health:  Results of a National Survey of Yoga Practitioners,”Evidence-Based Complementary and Alternative Medicine, Volume 2012 (2012), Article ID 983258, doi: 10.1155/2012/983258.  Full-text available on-line. The article appears in aspecial issue of Evidence-Based Complementary and Alternative Medicine called “Yoga as Therapeutic Intervention,” which currently contains ten other open-access articles with the promise of additional articles in the future.
** Worth mentioning is Sutra 1.22 from Patanjili (translation by I. K. Taimni in “The Science of Yoga”):  “A further differentiation (arises) by reason of the mild, medium and intense (nature of means employed).”